► Important Information!
Spouses Working Group
Jeri Graham shared the below downloadable file (Spouses Session with Jeri Graham – Why I want to be with you today!) which was the product ... [more]

Important News Postings for the NCCOC

It was good to be with you at the 1st QTR meeting of the NCCOC.

We hope that you will be able to attend the ZOOM General Membership meeting of Charlotte-Metrolina Chapter on January 16, 2022 @ 3 p.m. I hope that you agree that it will be a special privilege to be in the same “Zoom room” with the North Carolina Secretary of Military and Veteran Affairs, LtGen Walter Gaskin.

We want to take full advantage of this opportunity. To this end, please feel free to send me ”bullets” of specific topics that you would like to hear Secretary Gaskin comment on.

I look forward to hearing from you (whether you can attend the meeting or not).

President, North Carolina Council of Chapters, Military Officers Association of America is honored to have Walter Gaskin, Secretary of NC Department of Military & Veterans Affairs, as the speaker at the January 16th general membership meeting of our chapter.

Since we will be using the Zoom format for this meeting, we would like to extend an invitation to the Presidents of the 14 MOAA Chapter Presidents in the state of NC to take advantage of this significant opportunity to get a perspective directly from the Secretary of NC Department of Military & Veterans Affairs.

PLEASE EXTEND AN INVITATION TO THE NC MOAA CHAPTER PRESIDENTS TO ATTEND OUR MEETING ON SUNDAY, JANUARY 16 AT 3:00 P.M.

The chapter presidents who wish to attend will need to let you and me know via email, providing the email address they would want us to use in admitting them into the meeting. PLEASE RESPOND NOT LATER THAN THURSDAY, JANUARY 13 WITH INFORMATION RE: THE CHAPTER PRESIDENTS WHO WILL BE ATTENDING.

As you may know, Secretary Gaskin is a retired USMC LtGen who served in various high-level command leadership roles, as well as a key NATO position in Brussels, Belgium. Following retirement, General Gaskin served as Managing Director and CEO positions in Global Banking and Defense Technology firms. He also served on the NC Military Affairs Commission prior to being appointed to his current cabinet position advising the NC Governor on Military and Veteran issues.

With military pay being exempted from state income tax in 2021, NC had a banner year! MOAA and other military/veteran associations provided strength and situational awareness to the legislative process. The Governor’s support was critical in getting this initiative over the finish. The Department of Military & Veterans Affairs were catalysts in this team effort. Other challenges remain and Secretary Gaskin will discuss those challenges.

Email: Send LTC Anderson an e-mail here to your request to attend:

In North Carolina we’ve called ourselves “the most Military friendly state in the country” for quite some time. While it’s true that we’ve done a lot in the past 10 years to make North Carolina more military friendly, the one policy we didn’t have was to exclude Federal Military Retirement Pay from State Income Tax.

HB83 Eliminate Income Tax for Military Retirees was filed early this year. When filed by Representatives John Szoka, John Bradford, John Bell and Diane Wheatley, HB83 had strong bipartisan support in the House with a total of 59 bill sponsors and co-sponsors. On June 16, the House overwhelmingly passed the bill 100-5, in another major show of bipartisan support. Today, members of the Conference Committee on SB105, the state budget, signed the Conference Report which includes the text of HB83.

The timeliness of this action this close to Veterans Day is appropriate. Remember the words of our Declaration of Independence:

“We hold these truths to be self-evident, that all men are created equal, that they are endowed by their Creator with certain unalienable Rights, that among these are Life, Liberty and the pursuit of Happiness.”

What has kept these truths alive from the founding of our country until now is the Armed Forces of the United States. Soldiers, Sailors, Marines, Airmen, and the Coast Guard who freely volunteered to defend our country and our way of life in both peacetime and wartime. They, their spouses, and family have sacrificed immeasurably over their careers. Including HB83 in the budget is a fitting recognition of those sacrifices and the value that we place in military retirees.

When this budget becomes law, then we can truly say that North Carolina is the most military friendly state in the country. 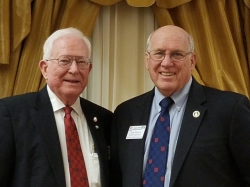 At the regular meeting of the NCCOC at the Hawthorne Inn and Conference Center in Winston Salem, NC, North Carolina Council President, Jim Brumit presented three awards to our Webmaster for the Marvin J. Harris Communication 2019 and 2020 awards that were previously held due to COVID-19 restrictions, and for the Council receiving a 5-Star award at the LOE Dinner in Arlington, VA.

Important Dates for all Chapters to Know

MOAA posting which has information on dates/deadlines to subscribe or apply for award programs in 2022.

Webpage link(s) to the Policy and Procedure Guide Appendix

Need help on any of these topics from MOAA?

Each of the below topics are hot linked to take you to the MOAA webpage dealing with the subject or provide a Word (.doc) or Adobe (.pdf) document on the subject.

- Certificates of Recognition and Pins

- Generating Non-Dues Income for Your Chapter

- MOAA Store and MOAA On Demand

- FAQs -- Getting Advertisers or Sponsors for Your Newsletter

- How to Work a Recruiting List - Adobe (.pdf) document

- 7 Good Reasons to Join a Chapter

The High County Chapter's celebration of veterans on Memorial Day was affected by the limitation due to COVID-19, but a memorial event took place at the site of the Chapter's Memorial in Boone, NC.

Click here for a copy of the Resource Guide.